Blog Home by Aristotle on 20 Jan 23 in Facebook Tips

Checking your blocked list of friends on Facebook ought to be a regular activity on Facebook so that if you have blocked a friend wrongly, you can quickly rectify it.

Facebook has remained strong because its users can easily interact with each other. Blocking too many people won’t make the platform more interesting or fun, but getting rid of the annoying ones is important. How do you access the blocked list of Facebook users? 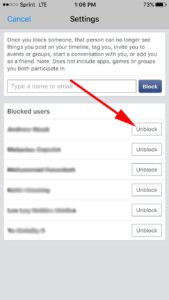 To unblock someone, click Unblock next to the name of the person you want to unblock. Then tap Unblock to finish unblocking the person. 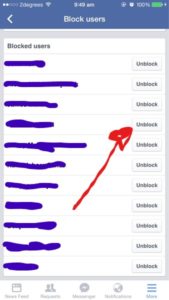 Creating a Facebook profile is one thing; another is the usage. As you may have already noticed, often you add friends who turn out to be tergiversators or betrayers, which you may decide to block.

Moreover, you often block someone mistakenly or due to an error and want to rectify it. It’s very easy; follow the steps below to unblock someone you blocked.

When you unblock someone, they can see public Facebook postings you make. Also, that person won’t instantly become a Facebook friend of yours. You will need to send a friend request to a previously blocked user once you have unblocked them.

Please note that if you unblock someone, you won’t be able to block them again for a few days.

How to Unblock Someone for PC or Facebook Web Version

Facebook is the world’s most popular social networking platform for sharing photos, news, inventions, and opinions. To connect with someone on Facebook, send them a friend request, which they can accept or decline.

Blocking someone means you won’t be visible to that person anymore. Your blocked list of friends on Facebook can’t be accessed or viewed by your friends. Only you can view it.

Is it still possible to tag someone who has blocked you?

Imagine you want to send a meme to a friend. Normally, you’d tag them by typing their name and tapping their profile link. They’d see the tag the next time they logged in.

However, if that person has blocked you, you certainly aren’t going to tag them in any of your posts, including memes, images, and any postings you make to your (or someone else’s) Timeline.

If you can tag an unfriended Facebook user depends on their privacy settings. It also depends on the group setup; you can’t tag someone if they’re not in the private group.

On Facebook, look for your friend. Log in and go to the site’s top left for the search field. Likewise, on the Fb application, you can know who has blocked you by searching for the person using the search bar at the top of your newsfeed.

Then, a listing of all profiles and pages will be displayed. To change results, tap People. If you’re blocked, their profile will be hidden. If you search All, you may locate them even if they blocked you.

If the user’s image shows, click it. If somebody unfriended you, you could still access their profile (though it depends on their security settings). If you’re blocked, nothing will load.

First, you must unblock the person who has been blocked on Facebook. This will allow you to view his or her profile once more, allowing you to send another friend request.

Select the Blocking tab on the left side of the page. In the Block users section, click Edit, then tap See your blocked list to see a list of profiles you’ve blocked on Facebook.

To remove someone from the blocked list, click Unblock next to someone’s name, and their profile will become available to you again.

Block users cannot read your posts, tag you, talk with you, or make you a friend request. But you might still see that person if you’re in a group or playing the same game.

Other block options, such as Block app invitations and Block event invites, can be found by scrolling down. You can use them to prevent somebody from sending you specific requests without entirely blocking or unfriending them.

Blocking a person removes all their photo tags. If you tag a photo before sharing it, only the person’s face or likeness will remain. If you don’t upload the photo, the tag is limited.

Even though the photo and name of the person will stay accessible, the tag will no longer connect you to their Timeline. The tag will remain active with a valid link to that member’s Timeline for those who haven’t blocked him/her.

You can alter the privacy of an individual photo or album to restrict its visibility and block it.

Click the gear-shaped options icon in the lower-right corner of the album you want to restrict.

To limit individual visibility for the album, use the “Don’t share this with…” option in the dialogue box.

Individual photographs in your “Mobile Uploads,” “Profile Pictures,” and “Timeline Photos” albums can have their privacy settings changed.

It’s worth noting that photos in the “Cover Photos” album must always be set to “Public.”

While blocking practically eliminates all relationships between two Facebook users, there are a few exceptions.

Before or after blocking, either sort of message can be deleted.

It’s possible that posts about mutual friends, such as those on that friend’s Timeline, will also be visible.

Mutual group memberships, event invitations, games, and apps may allow you to see and engage with people you’ve blocked indirectly.

To see who you’ve blocked on Facebook, go to your settings and check your list of blocked users.

To find out those users you have blocked, follow the steps below:

Using your smartphone, open the Messenger application. Select your profile photo in the upper left corner of Chats. Select Privacy from the menu. Next select People > Blocked users.

When you block someone, they won’t be permitted to access your Timeline anymore. They cannot access what you post on your status, tag you, offer you an invitation, contact you, or initiate a chat with you. You can also unfriend them if you are currently friends with them.

What is worse between unfriending and blocking?

Unfriending is a feature that allows you to delete someone from your friends list without informing them. You’ll still be allowed to access his or her profile and posts.

Blocking allows you to fully disengage from the users you’re blocking, making you both inaccessible on Facebook.

Feel free to drop any questions regarding this article in the comment section below.